The Digital Society School Traineeship is divided into five different sprints and the Maker’s sprint at the very beginning of Fall 2020.
Follow the progress of Open Up through the documentations and brochure.

After team and project allocations, the team started brainstorming and making rough sketches of their idea based on the briefing and the introduction with the partners. During this sprint, the team began participating in workshops and doing their respective research to kickstart their user research and conversational object. The object was also a way as well to gather insights and act as a springboard for the prototype, and instigate interest for the Showcase in September 17, 2020.

The objective of the sprint was to empathize our potential users in their context and have a clear understanding so that we can re-frame the research question of our project. The desk research on Middelland has gave context specific information about the neighborhood and its demography. Also, additional literature review provided theoretical guidance in looking at the problem by taking inside-out approach, known as ABCD framework. At the end of the sprint, the team prepare to take a trip to Middle to conduct a field observation and semi-structured interviews. 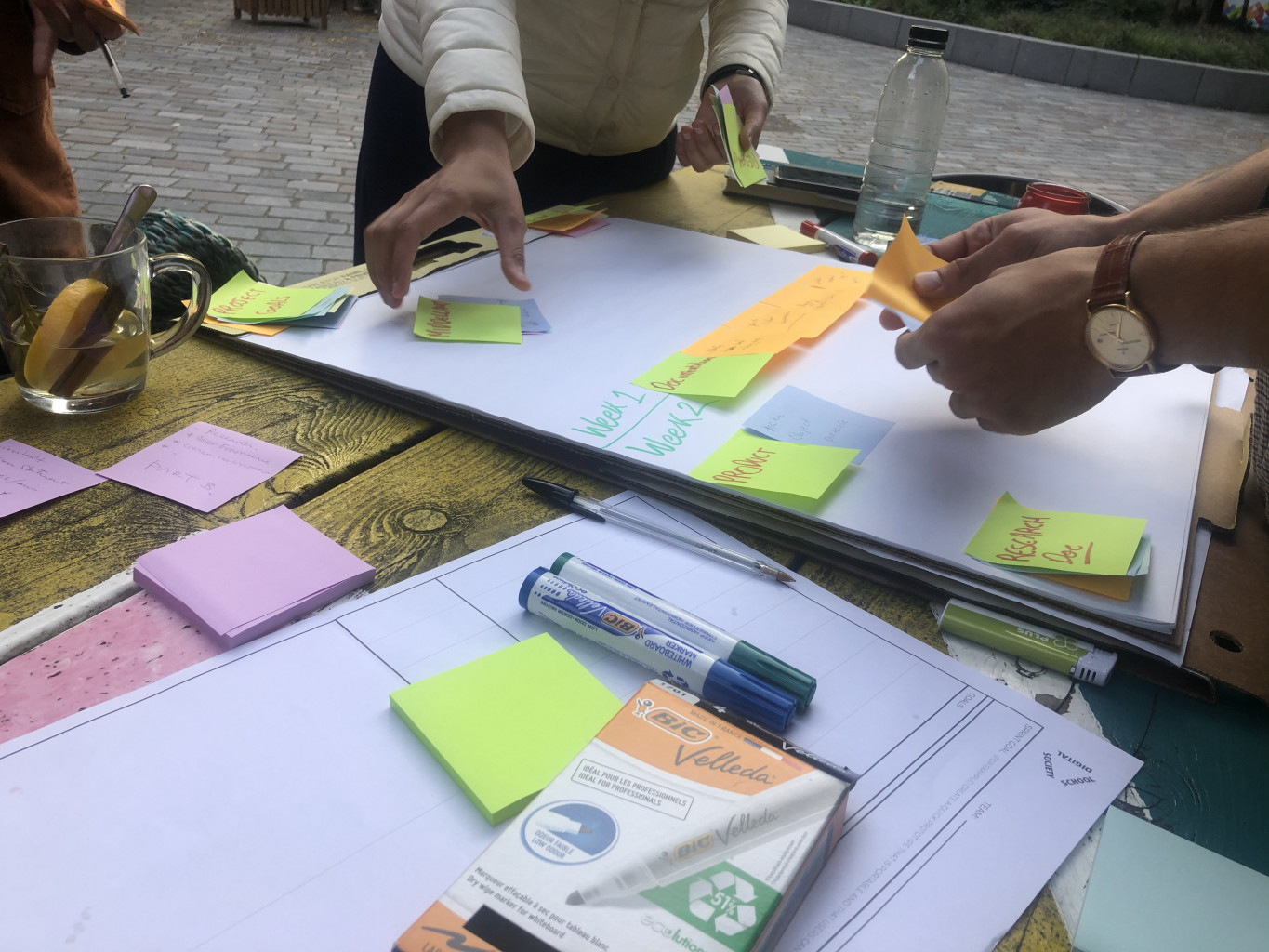 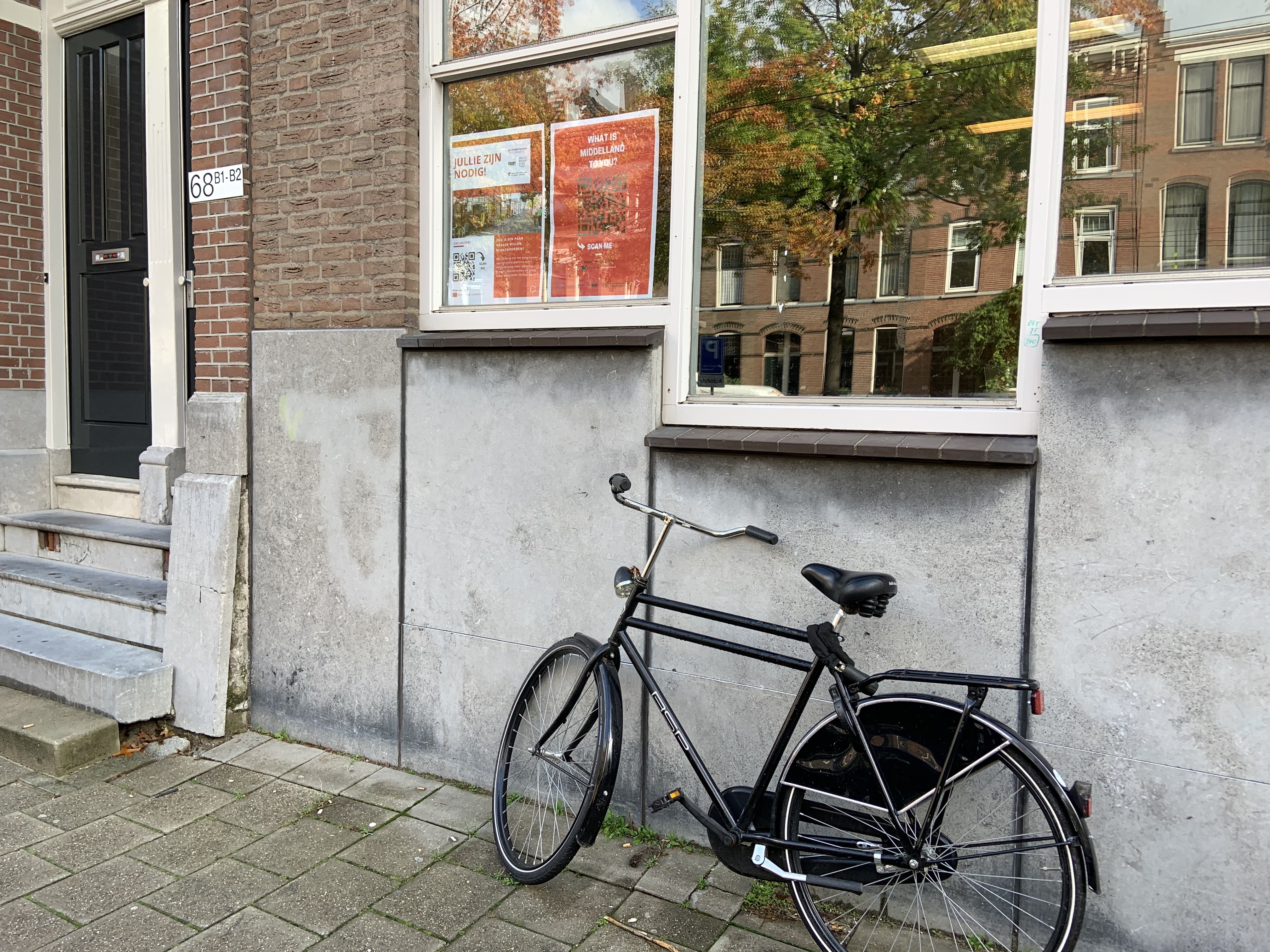 During the trip to Middelland, the team successfully conducted semi-structured interviews with local community initiators and residents. The team also decided to distribute posters with QR survey questionnaires around the neighborhood to enrich our data.
Due to Covid-19, the research process became very complicated and some resources inaccessible, and some groups were more difficult to reach. In this stage, we also create personas and conduct a co-creation session with partners to align the problem. 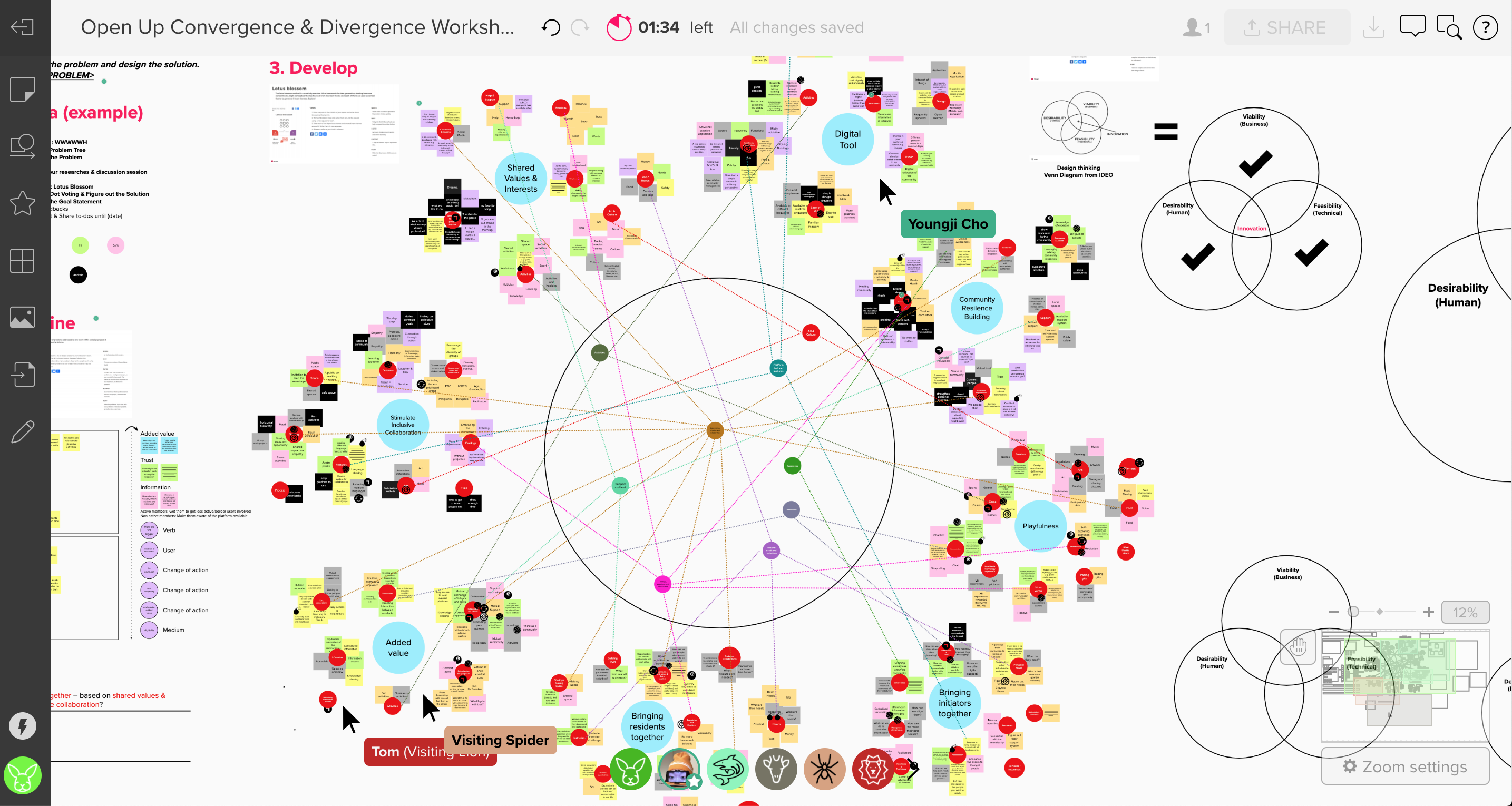 The third sprint is when the creation process really kicked-off for team Open Up! During the planning session, it was established that the team will start making and testing their low-fidelity prototype, finalizing their research report, and making a Medium post on the design process. It was also during this process wherein the team deep-dived into empathizing with users by creating user journeys. Then a user flow was made as well, and that is when the team began to decide on the features of Open Up and see how elements of playfulness and participation can be evoked in the product.
So far, the team has decided to focus on the idea of being a neighborhood hero! To facilitate the team's creativity, they also joined a workshop on Participatory Art, courtesy of their partners, Tom and Andreia. 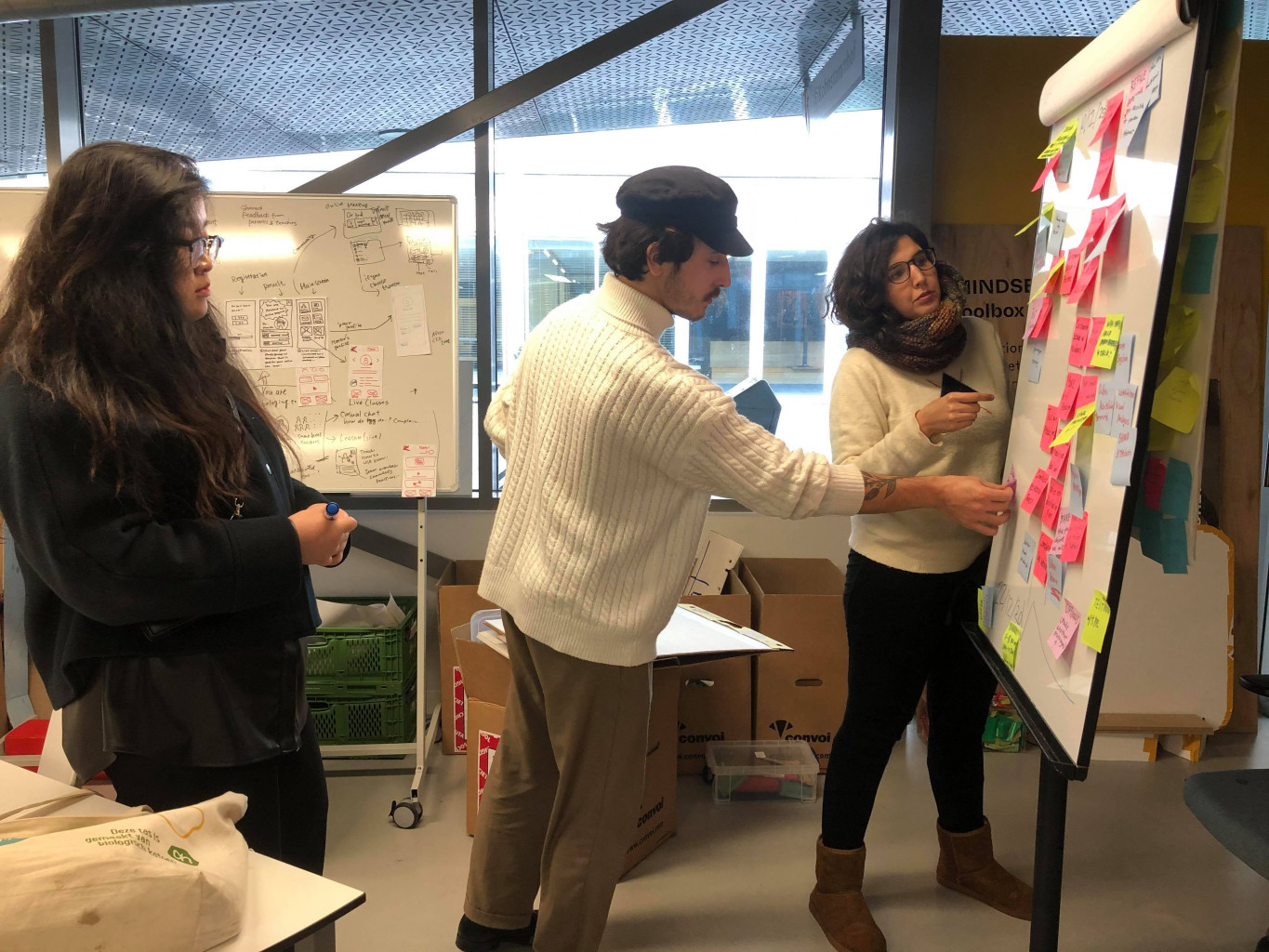 Crunch time!
The fourth sprint was the shortest sprint for team Open Up, as they only have two and a half weeks before the holiday break. The team began the sprint by planning their main tasks for the next few weeks, which included finalizing the low-fidelity prototype and start making a high-fidelity version. Aside from focusing on the application, the team is tinkered with the idea of making a small kit to entice the residents of Middelland to try the app. This kit included a hero mask and a flyer to explain the application. 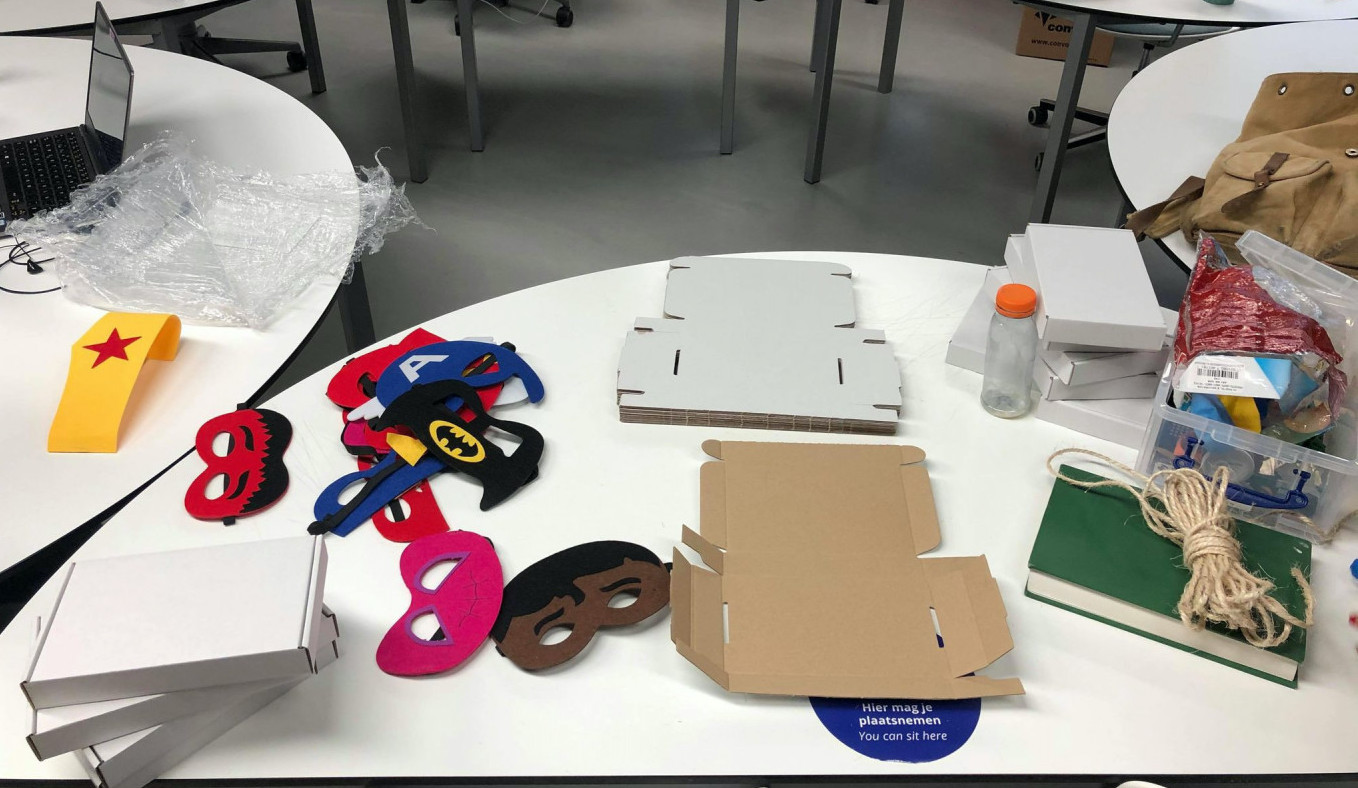 The team has made it to the last and final sprint of the DSS Traineeship!
Open Up, the application, has been finalized and includes illustrations from the artist, Diana Canales, and is out for testing and its final phase of the iteration process.
Each kit was handmade with love in the DSS Studio, and was then distributed to the residents and initiators of Middelland for testing and get their feedback on the app.